skip to main | skip to sidebar

Life as we know it right now

Life is always busy around here! Last Monday, Ava had a doctor appointment at Brenner Children's Hospital to figure out if she needed a helmet for her slightly flat head. For the first 4.5 months of her life, she only slept on the right side of her head. Every night when I put her down I would turn her head to the left to balance this tendency out. When I would go to bed I would check and see if she had turned her head (which she almost always had) and I would turn it back. When Jared got up in the morning he would turn her head, too. Despite these efforts she still developed the flat head on her right side. So off we went to the helmet consultation.

First, they put a little cottony cap on her head and took pictures from different angles. They used a hilarious Eeyore doll as a distraction technique:

Then, they put goggles on her head that had some sort of sensor in them and scanned her head with a radar gun-looking thing. As they were scanning, the 3-D image of her head was popping up on a computer screen. It was amazing, but she hated every second of it:

Then, they distracted her with a fun light toy:

Next, they covered her eyes with some tape so they could scan her face. She REALLY hated that:

Finally we met with the doctor and it was decided that she did need the helmet. The doctor spent about 20 seconds examining her and came to the conclusion that she also has Torticollis, and will need physical therapy for that as well. As you might have surmised I am not convinced that she has this, but we will see. In the end she is still our beautiful, happy, smiley girl:

They said the helmet would not bug her; that it would affect us more than it affects her. This could not be more true. She doesn't seem to notice it. I, however, hate this stupid helmet with every fiber of my being. I hate that I can't kiss her forehead, I hate that it impedes my ability to snuggle with her, I hate that she can't wear her cute hats, I hate that it prompts people to ask what is "wrong" with her, I hate the unasked questions that I KNOW people have but are afraid to ask! I just hatehatehate that she has to wear it. I am fighting feeling responsible for it. I hate that, too. I hate that other babies don't have to wear it. What a stupid thing to fret over! Alas, the feelings are there. It's only been a week - hopefully this horrible feeling will pass. But it is here now, in full swing. UGH! The doctor gave no indication as to how long she'll wear it. I fear that since she started out fairly young that she'll have to wear it longer - otherwise her skull will still be soft and it could just go flat again.

Anyway. Enough of that. Our lives have been full of adventures outside of the helmet as well. We have been lucky enough to witness in person both the unfortunate defeat that was Wake vs. Carolina AND the fantastic defeat that was Wake vs. Duke. Both times we left saying, what a game! The evening of Wake vs. Duke was especially interesting - it started with a certain prideful husband refusing to move his car from the Goodwill parking lot after being confronted by a Goodwill employee, a distraught wife moving it and ending up what seemed like miles away in a distant parking lot, all by herself in the depths of the dark and abandonded Winston-Salem streets, a nasty blowout from said adventure which led to said distraught wife not paying attention to where she parked the car, and an hour-long frantic search for the car which ended with the aid of a Sheriff deputy. What a night!

So, here we are. Tonight we got last-minute tickets for Mamma Mia. Who knows what will happen next! 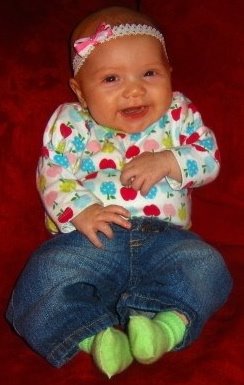 Born 9/5/08. Loves binkies, her swing, bouncing and when mommy sings to her. Growing bigger and sweeter every day!